The Department for Transport have announced that an investigation will be carried out in to the safety of Smart Motorways within weeks.

Although the investigation will be carried out by the DfT internally rather than by an independent entity, I think we should commend Mr Shapps, and give the DfT the benefit of any doubt — for now — by encouraging them to follow through with the investigation.

The investigation was announced after the latest story of a Woman whose husband was tragically killed on a section of M1 smart motorway in June.

She is convinced it was the floored design of the “Smart Motorway” not having a hard shoulder that caused his death.

Based on the information I’ve seen — and basic common sense — I agree completely.

On 7th June, her husband, Jason Mercer, waved goodbye to his wife through the window of the coffee shop where they’d just had breakfast together.

He proceeded to drive his company car on to the M1 where he had a minor collision with another motorist.

Not knowing what to do, both he and the other driver pulled as far to the left as they could and nervously got out to exchange details…

Whereupon they were hit by an 18 tonne HGV and were both were killed instantly.

It’s possible they stopped because they were aware that it’s CRIMINAL OFFENCE not to stop at the scene of an accident.

Anyone found guilty of failing to stop will receive 5–10 penalty points on their driving licence, and the maximum penalty is a fine of up to £5,000, or six months in prison!

Although official figures appear to be unavailable as to how many people are being killed specifically on smart motorways, we hear stories all the time of terrible accidents, which by any measure of common sense would not have happened if not on a smart motorway.

However… Highways England chief executive Jim O’Sullivan said that smart motorways are “as safe or safer than conventional motorways”.

I propose that you are either delusional, a liar, or you think that we are all idiots.

Please do respond, with facts to back up your argument…

The audacity of this type of Bureaucrat genuinely astonishes me.

One Government stat that is available shows that deaths on Britain’s Motorways increased by 8% between 2017 and 2018, so it looks as though this “argument” (which is not backed up with any justification whatsoever) is easily disproved.

In further denial, Highways England stated that smart motorways are “good for drivers” after another fatal crash M1 recently…

Drivers took to social media to label smart motorways as an “absolute death trap” and “the most stupid initiative ever” after a lorry ploughed into the back of broken down car in lane one of the M1 near Chesterfield.

When questioned about the risk of there being no hard shoulder to pull in to, the gangsters at Highways England claimed that hard shoulders are dangerous!

They say this is because “people stop on them unnecessarily”.

They seriously claimed that: “removing them eliminates risk.”!

I’d like to ask the spokesperson who made this claim:

Do you truly believe this?

If you really do believe it, could you please provide the the thought process that led you to this conclusion?

Because to us people living on planet Earth — who’s families actually have to use these “smart” motorways — what you are saying seems to have no basis in reality.

We put out a video to BTST Members back in July 2016, expressing concerns about how dangerous an — at the time — new section of smart motorway on the M25 was.

Since then, smart motorways have proliferated and many are MUCH WORSE than the one shown in this video, with completely solid barriers right next to the inside (and outside) lanes.

I would normally ask you to leave your comments on this blog post, but as this is such a serious problem, why don’t we try to get this message out to as many people as possible?

There is a ground swell and now is the time that we should be pushing hard to try to get smart motorways banned.

I’ve just uploaded the old video to YouTube a few minutes ago.

Please let the video run through and leave your thoughts in the comments section of the video.

This will hopefully trigger YouTube’s algorithm to promote the video to people outside of the BTST community — lets see if it works!

You can open the video and leave your comments here: 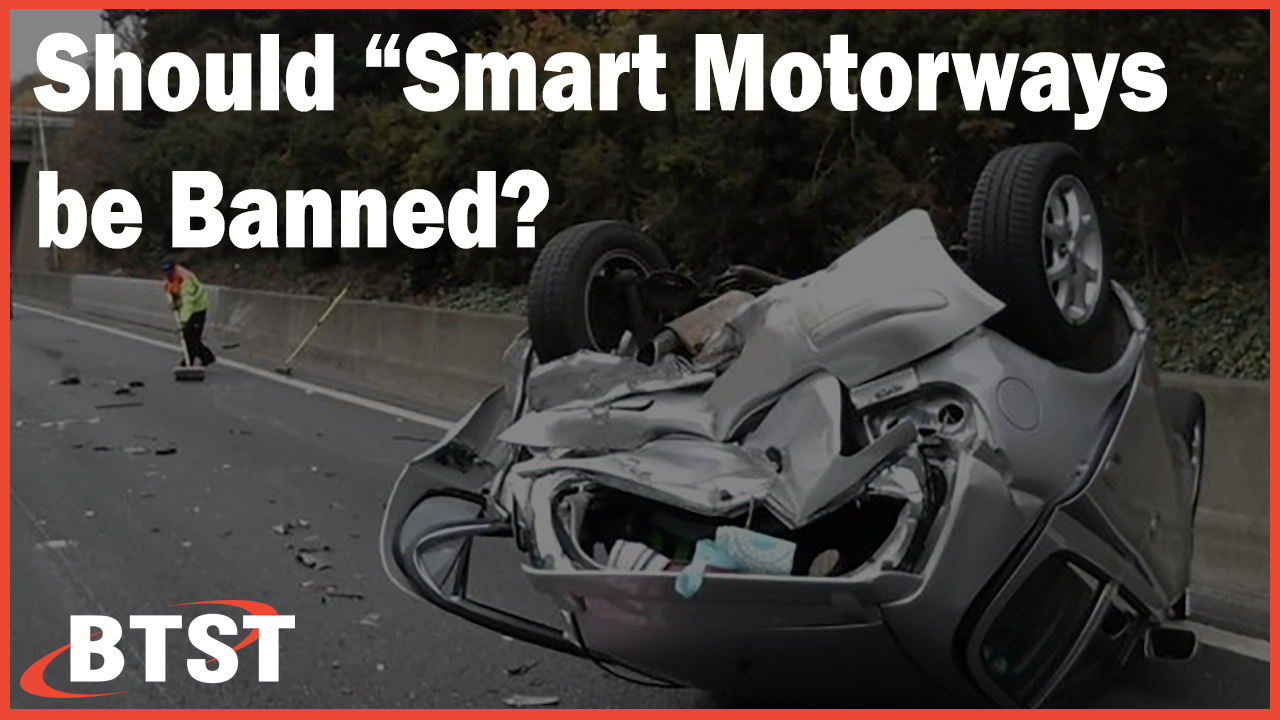