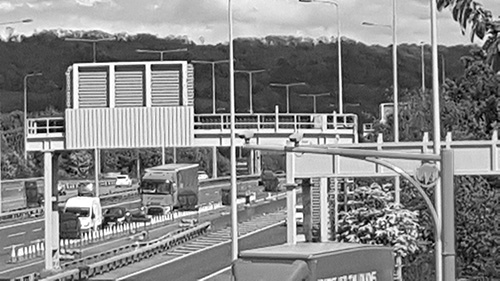 I’ve heard from countless BTST Members who’ve had close calls when a 50mph speed limit has flashed up for no apparent reason, and drivers have panicked in front of them by slamming on the brakes because of fear they’ll receive a speeding fine.

It happened to my brother in law, Gary – who has a long commute to Oxford each week —  a few months back when he entered a “variable speed limit” zone.

Everyone braked, knowing they would receive a fine if they didn’t, and there was almost a multi-car pile up. He was genuinely shaken by the experience.

We’ve talked about the abuse of smart motorway speed cameras time and time again over the last couple of years, but it wasn’t until last week that it really hit home:

I was driving along a section of the M25 around mid-evening.

The traffic was fairly light for the M25 and running smoothly.

I had the cruise control on and was following the car in front at (thankfully!) a nice safe distance.

The all of a sudden, a 50 MPH temporary speed limit flashed up on the gantry and the car in front slammed on their brakes…

I was so close to hitting the back of their car!

I’m not easily fazed on the road, probably due to my racing background, but I was full of adrenaline!

It would be easy to blame the driver who slammed on the brakes, but I think that would really miss the point.

Yes, they really shouldn’t have slammed on the brakes because it was extremely dangerous, but no driver is perfect and we all make mistakes (whether we like to admit them or not!).

My point is that it wasn’t intentional, but rather a reflex action to seeing the temporary speed limit suddenly switched on.

What was surely intentional however, was the mis-use of the average speed camera by a Government Agency who are supposedly “experts” in road safety and driver behaviour!

These sorts of abuses must surely have caused hundreds of crashes either directly or indirectly since “smart” motorways came in to use.

And that’s not even beginning to consider the misery caused to Millions of Motorists each day who have to endure the artificially caused traffic jams where smart motorway speed cameras are in operation.

What do you think about the dangers of smart motorway speed cameras?

Let me know comments below: